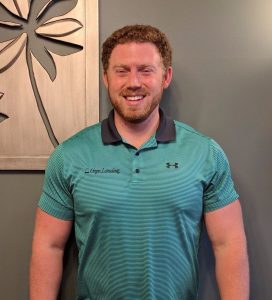 Joel has been with Hope Landing since 2011. Since hired, he has served in multiple roles including caregiver, project manager, and now serves as our Executive Director. While he wears many hats, his primary charge is to manage the day to day business operations, he also enjoys assisting our owner with business development. Joel came to Hope Landing fresh out of college with a degree in Biology from Olivet College. He found his niche while caring for the residents of Hope Landing. Since graduating Olivet, Joel has received his Certified Assisted Living Director and a Certified Dementia Practitioner. His service extends beyond Hope Landing as he helps the Michigan Centers for Assisted Living as the Marketing Committee Chair. He is also a Board Member of The Charlotte Rotary Club. Joel is happily married with a daughter and a four-legged baby. Joel enjoys staying active through many forms of physical exercise. The area of his job he enjoys the most is one on one time with each resident. The time spent connecting, building relationships and sharing stories is why he loves coming to work each day. 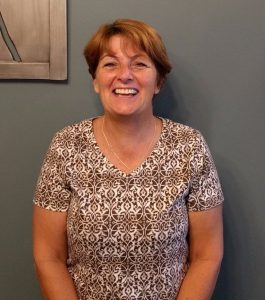 Director of Operations and Dining Services, FranCee English, grew up in the Chicago suburbs. She moved to Michigan over 30 years ago. Before coming to Hope Landing she helped her husband manage the Charlotte Country Club, where she oversaw the restaurant and lounge operations. Prior to being employed with Hope Landing, she did some volunteer work. During this time, she fell in love with the family-like environment. After the Country Club was sold, she decided to join the Hope Landing team. She has been a member of the Hope Landing Team since 2012.

In her spare time, she loves spending time with family. She loves the outdoors and attempts to golf. 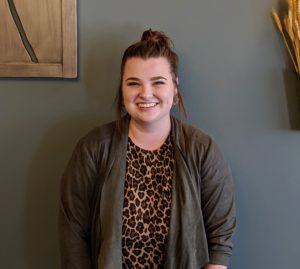 Maddy has been with Hope Landing since 2016. She came to Hope Landing fresh from Central Michigan University. Because Maddy had experience in food service at CMU she initially joined Hope Landing in the kitchen. At the time, she thought it would be a year or less tenure. After a while Maddy decided to try being a Caregiver within the business. It was during this time that her heart was really changed and she decided that caring for seniors is what she was meant to do. Maddy has always been a favorite of our residents and has frequently been voted Teammate of the Quarter by her peers.

All of her success lead to her earning her current role as our Care Team Coordinator where she leads our care team. Outside of work Maddy has many hobbies. She has two pups which she loves to snuggle, she enjoys painting, playing cards, watching TV and renovating her 100+ year old farm house. 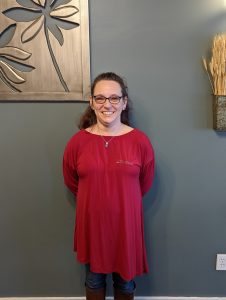 Kelly has been with Hope Landing since 2014. She worked as a caregiver with the company for over 6 years. In those years she often said “yes” to new challenges and took opportunities to learn new skills. Saying yes and learning those new skills led her to being selected as our Resident Care Coordinator. Kelly grew up in Charlotte. Prior to working at Hope Landing, Kelly worked over a decade in the retail. Following her time in retail, she spent time at home focusing on her family and being a mom. In her time home, she realized that she is happiest when she is around people. She decided to seek a job that could fill that need, and that is when she began working at Hope Landing. With her caring heart, and love for people…the job and her clicked from the start.

When not working, Kelly enjoys spending time with her family.

You have created a “Dream” assisted living facility. Thank you for providing a beautiful facility that is attractive, has delicious food, social activities, and most important – spectacular staff. Thank you for your personal touch. God bless you.

Dear Lyle and Staff, Thank you so very much for the wonderful care you gave my Mother Leona for the last 6 years.  She made wonderful friends at Hope Landing and enjoyed all the activities you provided.  When Sheri and Joel went to the hospital to visit with Mom, Sheri picked up Mom’s hand to comfort her.  Mom looked into Sheri’s eyes and asked he… END_OF_DOCUMENT_TOKEN_TO_BE_REPLACED

Dear Lyle & Staff, Lyle, I want to take this opportunity to thank you and all of your staff for the wonderful care you gave my mother during her stay at your facility. All of our family appreciates how welcomed our mother felt. Even though my mother missed her home of many years, she knew she couldn’t have come to a better place. We also want to t… END_OF_DOCUMENT_TOKEN_TO_BE_REPLACED

We wanted to thank you again for all the care and thoughtfulness you gave to our mother over the last two and a half year of her life. She was at home there and greatly appreciated all that you and Cheri and the entire staff did for her. She wasn’t real hard to please, but I know she had her moments. We found your care superb and your generosity of… END_OF_DOCUMENT_TOKEN_TO_BE_REPLACED

The children of Lois Podany

The comfort and peace of mind we felt as we walked through the doors of Hope Landing for the first time, was remarkable. We had visited many different places, but at Hope Landing we felt welcomed in the same way you would from a family member. We knew from that very first visit, this was the place where we would want our father to stay. The manner … END_OF_DOCUMENT_TOKEN_TO_BE_REPLACED

There is no way our family can express our gratitude for your compassionate and gentle care you gave our dear mother. She was so comfortable and at home there. When we asked her who her favorite was, she always replied, “Oh, they’re all good kids, and I like them all.” Thank you all for making her last sixteen months as easy and enjoyable for her a… END_OF_DOCUMENT_TOKEN_TO_BE_REPLACED

The family of Maggie Kenny

Where do I begin? I don’t have enough words to thank you for all you and everyone at Hope has done for myself and especially my mom! The care and compassion that you all have shared is overwhelming. I’ve made wonderful friends & wonderful memories at Hope! Mom loved her little apartment! She loved the fireplace and she loved all of you! Th… END_OF_DOCUMENT_TOKEN_TO_BE_REPLACED

Dear Lyle & Cindy, Thank you for the wonderful care you and your staff gave to mom during her four and a half years at Hope Landing. Hope Landing really became her home and you did so much to make her comfortable. It was such a comfort knowing she was safe and so well-cared for also. The concern and compassion extended to all of us during her fina… END_OF_DOCUMENT_TOKEN_TO_BE_REPLACED

Hope Landing is a small, caring hometown assisted living facility. I feel very lucky that I found such a wonderful place for my Mom. From the moment you walk into the building, you feel at home. Each resident has a small but comfortable room, where they may bring their own belongings. The rooms are kept very clean by a wonderful staff. Activities a… END_OF_DOCUMENT_TOKEN_TO_BE_REPLACED

We just wanted to say thanks for all you did for Iva. You don’t know how much peace we had knowing she was in good hands. Your staff was wonderful. I know she always talked about going home, but I know she liked it there and she liked the people and staff. (She thought it was a real nice hotel.) Denny says if you ever need anything, call. He really… END_OF_DOCUMENT_TOKEN_TO_BE_REPLACED